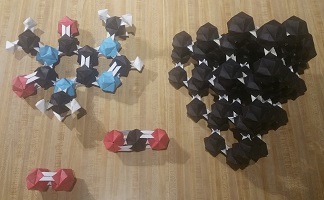 This is a selection of of various molecules that DofT has built.

This is the home for the instructions on how to construct origami molecules. Instructions will include making atoms out of a variation of sonobe units, and the different bond units that are used to link the atoms together in interesting combinations as well as example molecules including water, carbon dioxide, diatomic nitrogen, and perhaps a few others. Currently we have instructions for atoms, one type of bond unit, and assembly instructions showing how to make a water molecule.

Two years on and that "renewed sense of motivation" mentioned below was apparently quikly overridden by that "Life and Shiny Things" stuff DofT is always talking about...

We mentioend this on the homepage, but since it's directly related to this section, it seems fair to say something about it here as well: Over the last week or so, a few people have reached out asking for more instructions, and in particular about the other bond modules and how to assemble them.

We realize that DofT has "oThEr ReSpOnSiBiLiTiEs" 🙄 but we're going to lock him in the basement until we get more content.... Just kidding, DofT doesn't actually have a basement. it's crawlspace, and not really well suited to doing origami projects, but he really is setting aside some time in the coming days to work on this so keep an eye out.

So DofT has emerged from the dark place having posted enough information to build molecules with single bonds. He, of course, has other responsibilities to attend to as well, but with a renewed sense of motivation, he's planning on continuing the updates to flesh out this section.

This section of the site has been on the back burner for a while but DofT was contacted this morning (May 24, 2020) by someone looking for a bit more details on how to, y'kno, put it all together, so we're going to try to get some updates done for you. How about that?

DofT says it was nice to bond with someone over the love of origami and chemistry... bond.. After a groan, we've sent DofT into the dark place to churn out some instructions.