Clicking the full size image will download a PDF kit which you can then print. All instructions are included with each kit. 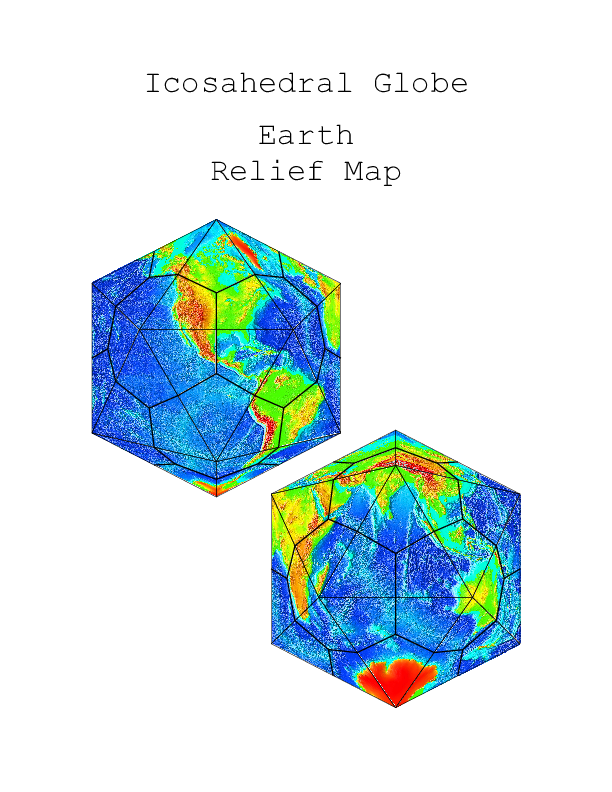 This is the original globe based on the graphics from the NOAA kit. 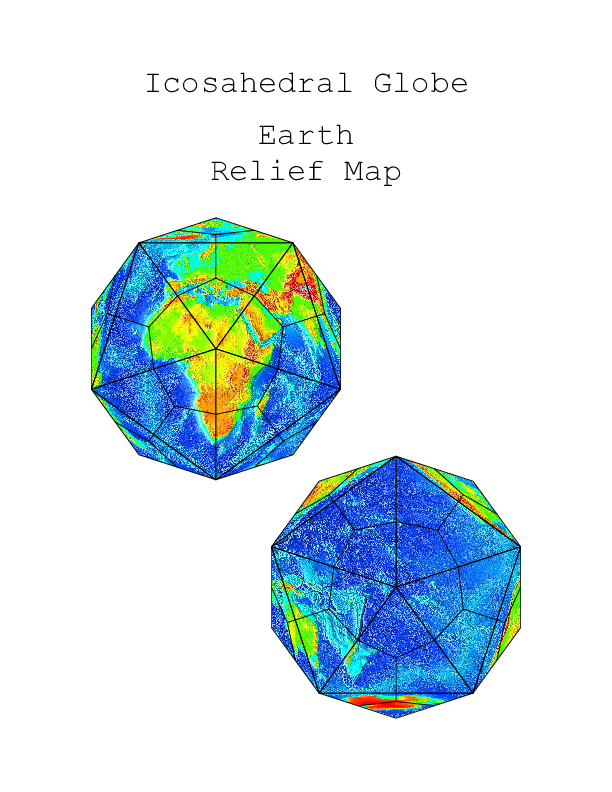 This was based on the same source graphics, but using a different orientation so that the poles are centered on faces rathar than on vertices. This took a lot of tedious trigonometry to sort out what latitude and longitude each face needed to be centered on. 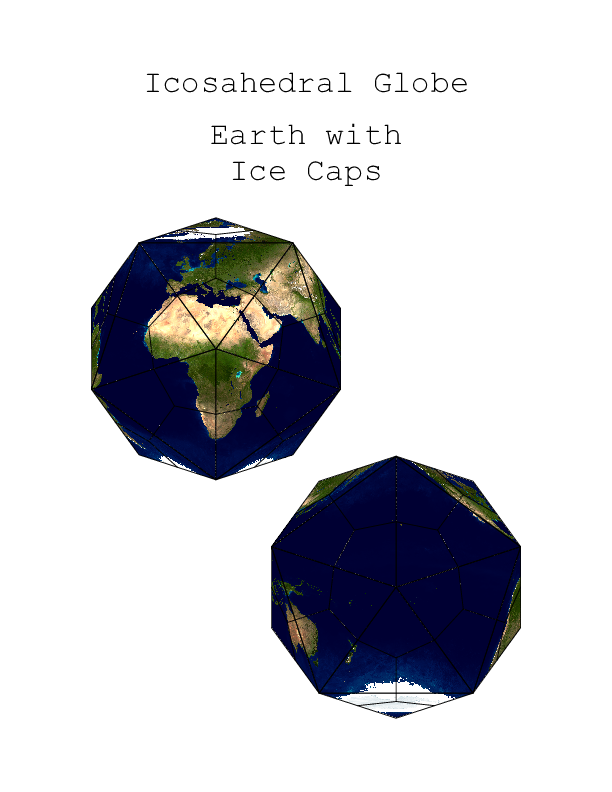 This one uses map data from NASA's Visible Earth website which shows a cloud-free view of the earth including the polar ice caps. 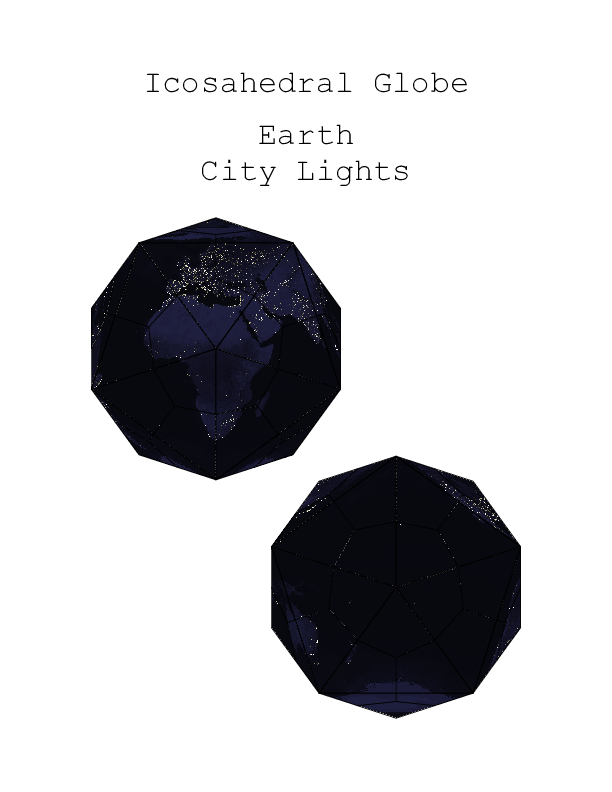 Once again, from NASA's Visible Earth website, this is a global view of the Earth "at night" so to speak. One of these days maybe I'll make a globe with an actual day-night boundary using this and one of the other Visible Earth maps. 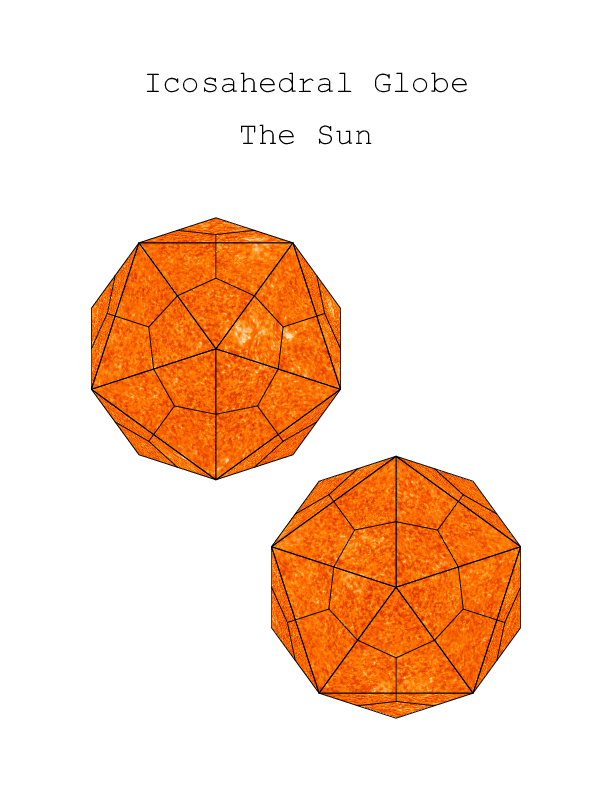 Right smack in the middle of our solar system is.. well.. the Sun. From where we sit, we can only see one side of it at a time. Back in 2006, NASA launched a pair of space probes that they collectively call STEREO - the Solar TErestrial RElations Observatory. Since then, one has been drifting further ahead of the Earth in it's orbit. The other has been drifting further behind. On February 6, 2011, they passed the point where they could actually see the entire far side of the Sun. Now, with the combined views of the STEREO spacecraft and the SOHO observatory, we are able to see the entire surface of the sun! This map came from NOAA's Science on a Sphere datasets of the helium emissions of the sun. 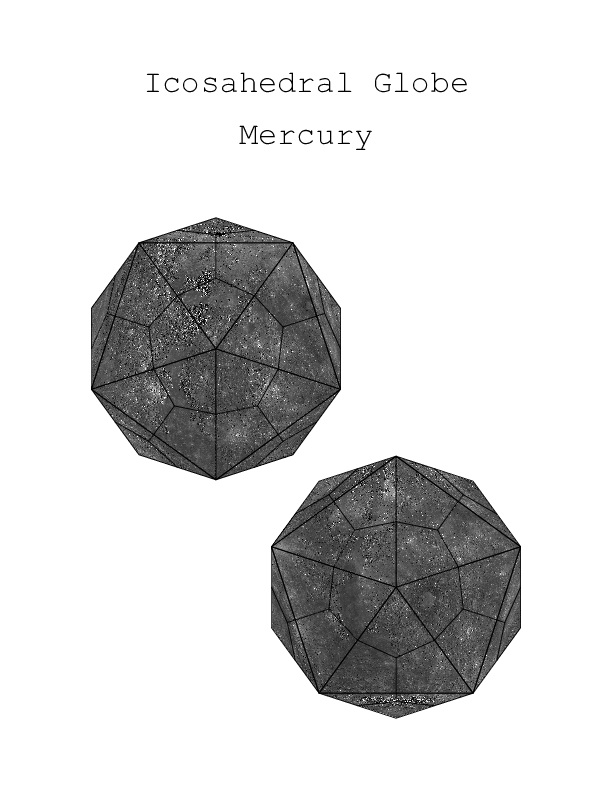 Mercury is the closest planet to our sun. Until relatively recently, we only had detailed images of about 45% of the planet's surface. Fortunately, the MESSENGER probe that was in orbit around Mercury has fixed all that. We now have images of nearly the entire planet. Taking advantage of that and running the map from the offical MESSENGER website through my icosaglobeulator script has produced a kit for you to construct 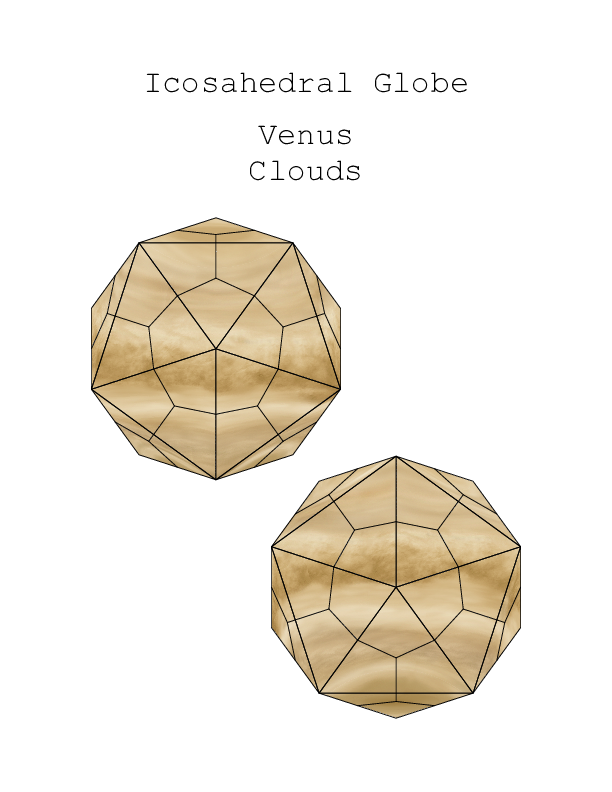 For a long time, this is all we could see of Venus. The planet is covered with a thick atmosphere including a cloud cover that blocks our view of the surface. This, of course, led to wild speculation of the surface being a beautiful tropical paradise... mostly by wishful science fiction writers. While the Mariner flybys didn't give us a good look at the surface, we could tell that it was less a paradise and more like we imagine hell to be like. It wasn't until the russians landed probes that we had any idea how hellish it is. 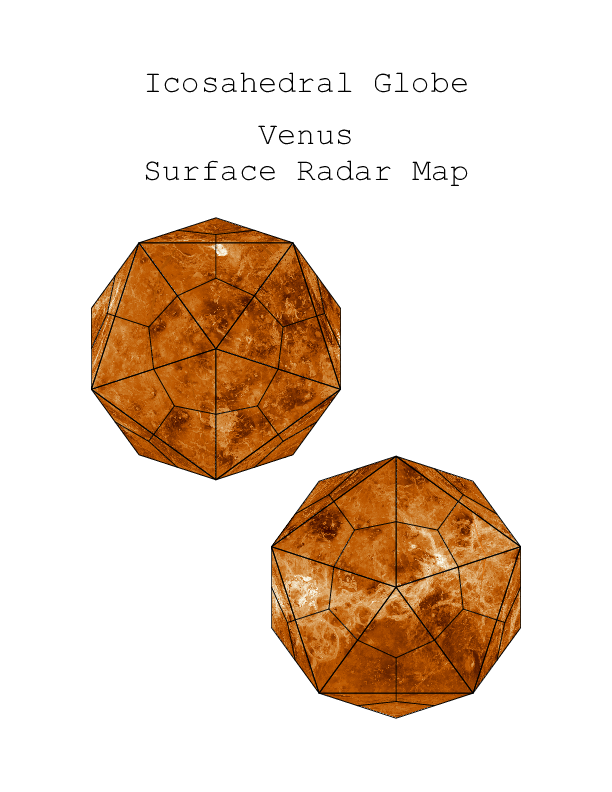 We didn't have a good idea of what the surface looked like until we sent the Magellin mission to venus which used it's radar system to pierce the cloud layer and map out most of the surface. This globe kit was built using the resulting image data. 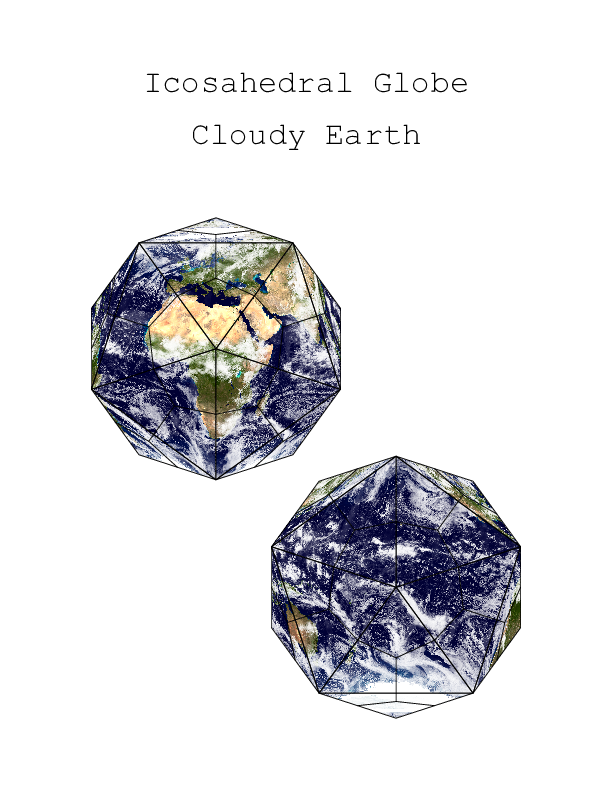 This one also takes it's graphics from NASA's Visible Earth website. This version includes clouds and is reminiscent of The Blue Marble photograph taken from Apollo 17 en route to the moon. 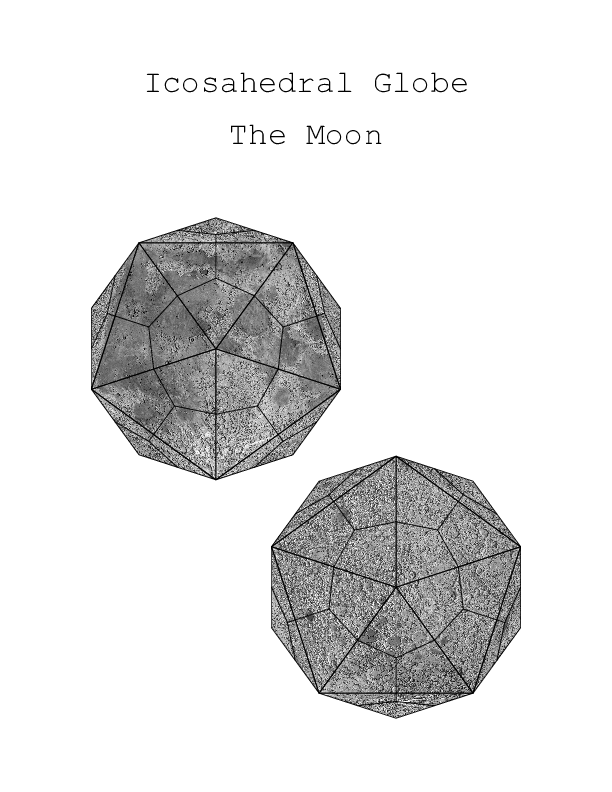 Once I figured out how to make globes using any equirectangular map data, I decided to make more than just icosahedral earths starting with our own moon. This map data came from JHT's Planetary Pixel Emporium which has several texture maps of various solar system bodies as well as a lot of other interesting content. 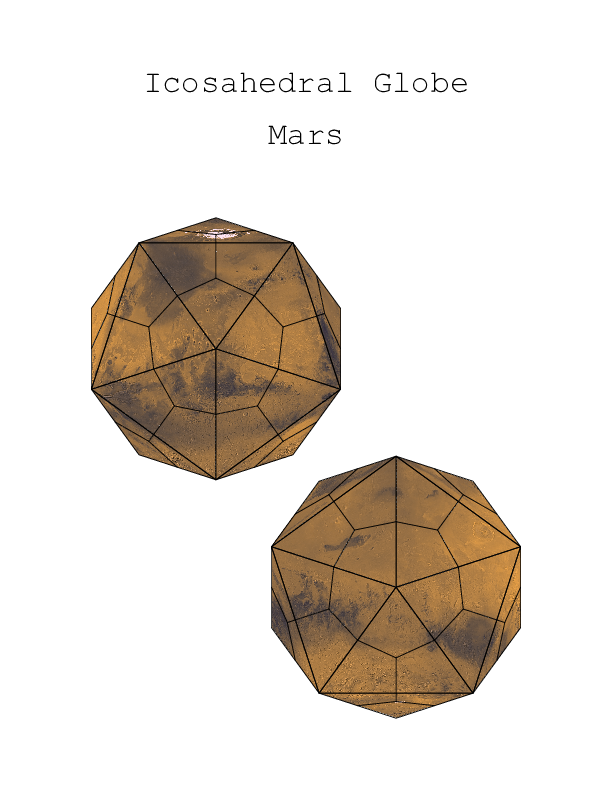 Moving further out from our home, we arrive at Mars. This map data comes from NASA's Jet Propulsion Laboratory based on Viking images.

On to Jupiter. This map data was also taken from NASA's Jet Propulsion Laboratory, this time from their PhotoJournal site. It is based on data captured by the Cassini spacecraft while on its way to Saturn.

With the Juno probe taking such fantastic pictures of Jupiter and it's polar reigons, this kit is going to need to be updates. 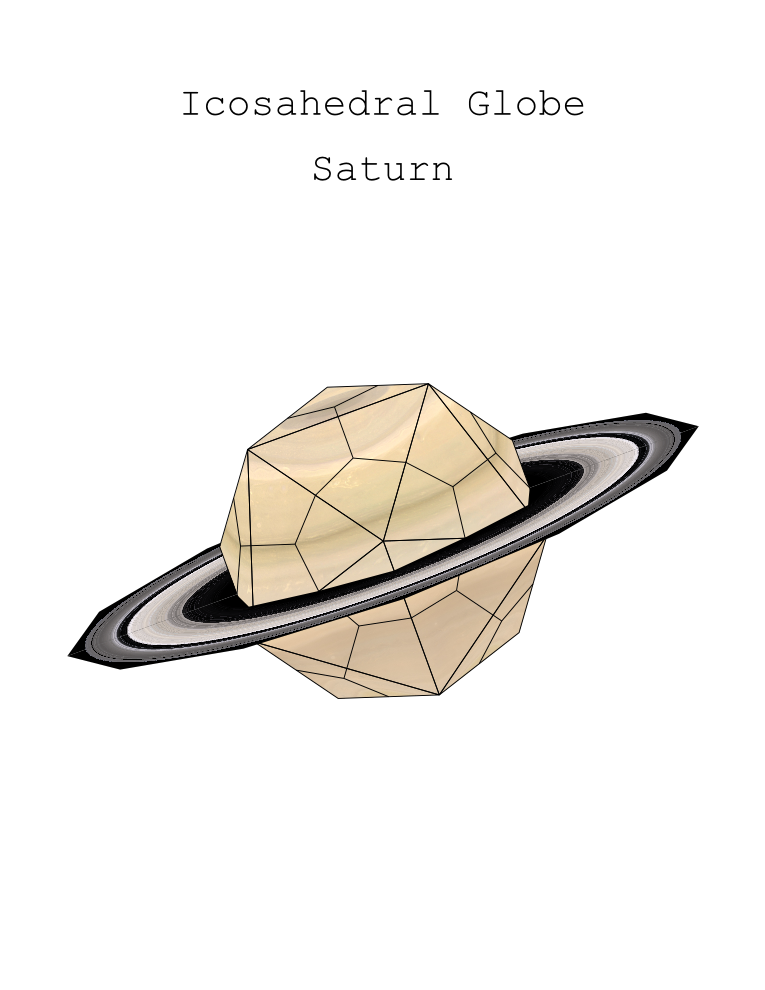 Saturn. It may second place in the size category but it boasts the most impressive ring system in the solar system.

This kit took a lot of extra work. The globe itself was easy enough but the rings were something extra. I ended up designing a pair of modules and then overlaying a gradient map based on color and transparency data for the rings. The the URL for the website that the map and ring data originally came from has changed slightly. 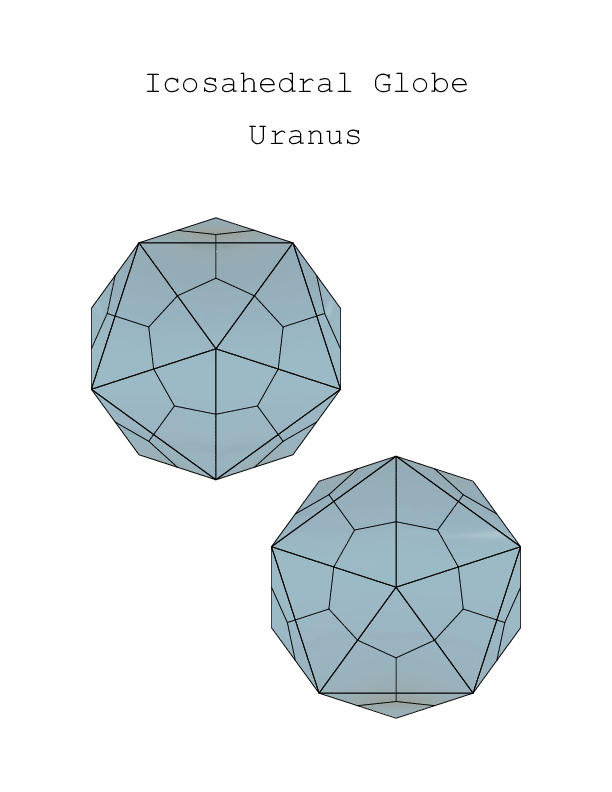 After a lot of beautiful images taken by the Voyagers flybys of Jupiter and Saturn, it turns out that by comparison, Uranus is rather disappointing. There are some interesting things about Uranus though. For instance, its axis is tipped nearly on its side. The graphics for this globe came from JHT's Planetary Pixel Emporium as well. 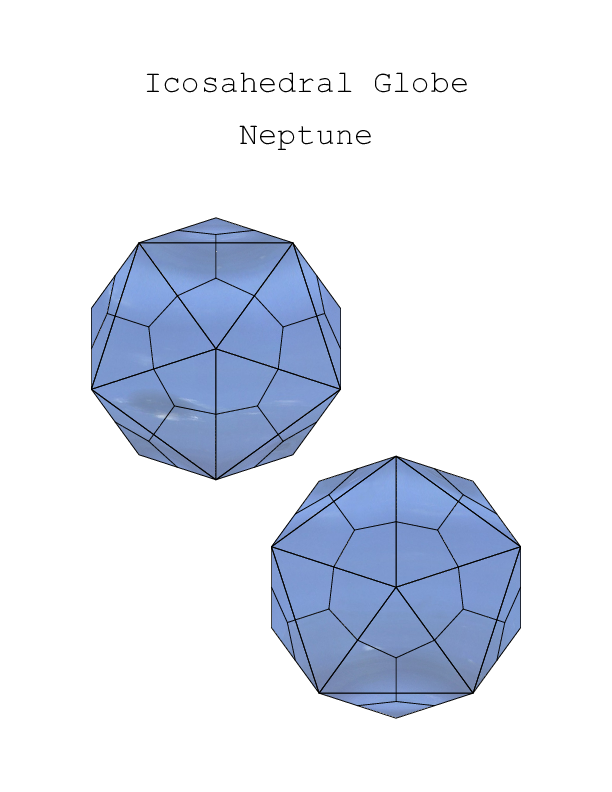 The eighth planet. After the relatively bland and mostly featureless Uranus, we were all pleasantly surprised by the brilliant blue gas giant with interesting weather. During the Voyager 2 flyby, we even got to see a large dark anticyclone similar to Jupiter's great red spot. More recent hubble images have shown us that Neptune's great storms are not nearly as stable as Jupiter's. It disappears and reforms elsewhere on the planet and may be dependent on the local seasons. In any case, it's a beautiful world. 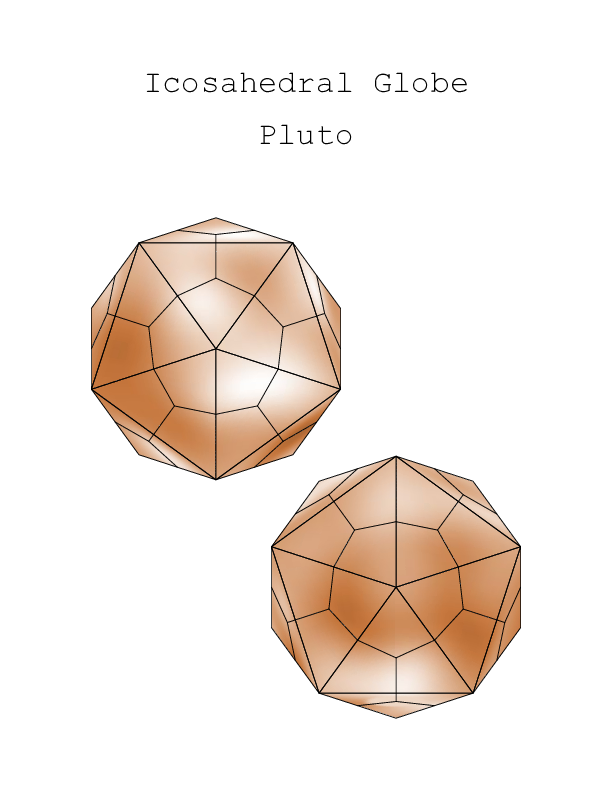 Up until the New Horizons flyby in 2015, this was the best map we had. It turns out the pluto system is a lot more crowded than we ever thought. Pluto and Charon are close enough in size that they both orbit their common center of mass positioned in the space between them. In addition, we have discovered several smaller companions that orbit further out. 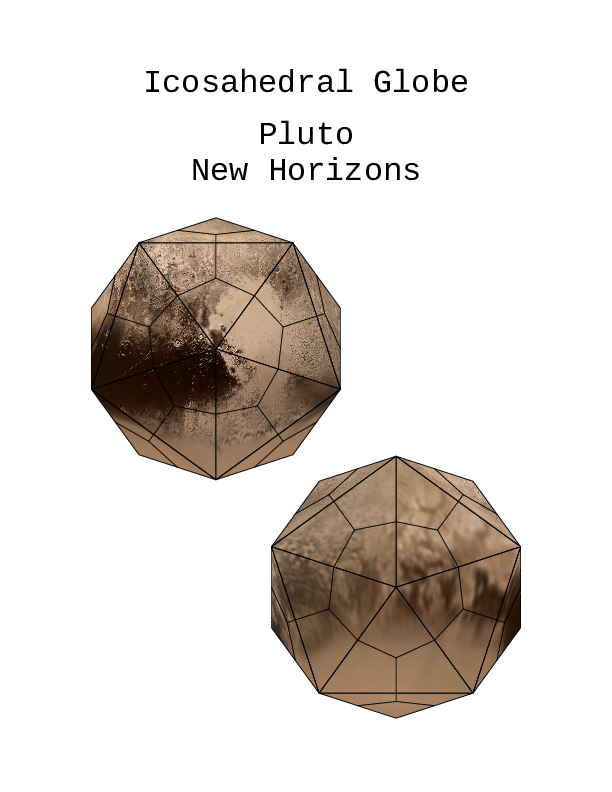 After the New Horizons flyby in 2015, we got a much closer look at the distant dwarf planet and its satellites. We weren't able to get a particularly great view of the south polar reigon, but this is a whole lot better than we had before. 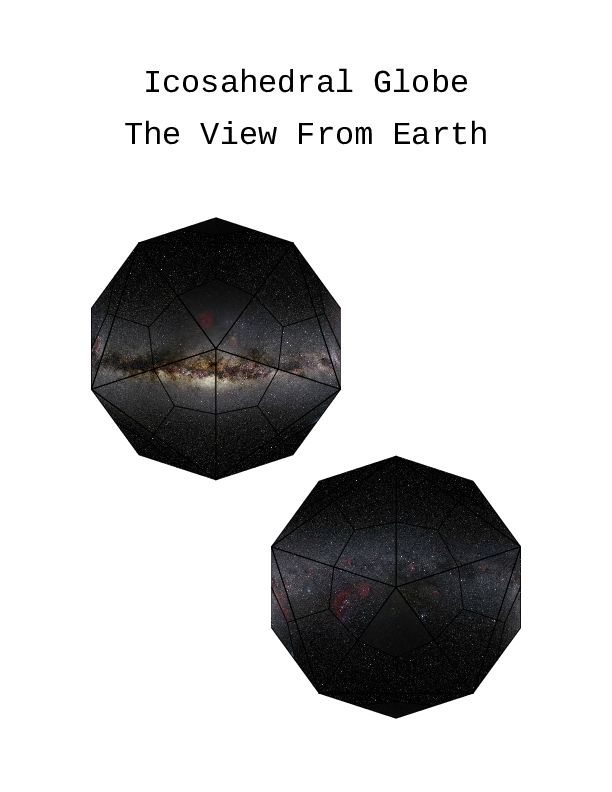 This is an inside out view of the night sky where one can clearly see the plane of the Mikly Way galaxy. 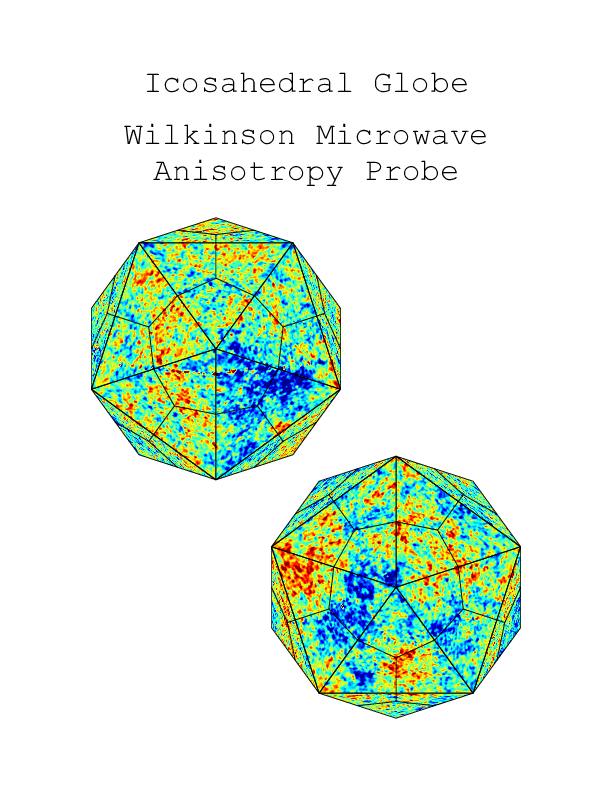 Moving out to the furthest reaches of time and space, all we see is microwaves. The Wilkinson Microwave Anisotropy Probe set out to make a detailed map of the extremely tiny variations in the microwave background in the hopes that it could provide some details on the origins of large scale structure of the universe. The WMAP Science Team has given us a lot of valuable information including that detailed map they were after.